Once, the area where Richmond now stands was part of an inland sea. In fact, it has been estimated that the water here would have been 40 metres deep!

Back 110 million years ago, creatures such as pliosaurs, plesiosaurs, ichthyosaurs, turtles, fish and giant squid ruled the Richmond Shire and beyond. Now you can have your own unforgettable, prehistoric journey and find their fossilised remains at the premier marine fossil museum in Australia, the world-class Kronosaurus Korner. The museum is a star attraction on Australia’s Dinosaur Trail and boasts the finest and most complete skeletal structures of these awesome animals. All fossils have been found within a close radius of Richmond, discovered largely by accident and have been prepared for display in the centre’s own laboratory, which is a credit to the town and the centre itself.

At Kronosaurus Korner you can marvel at it all, as the complex combines an accredited visitor information centre with a working laboratory (fossil preparation area) and a marine reptile centre. Hand-held audio guides are available so you can tour the complex at your own pace, and a theatrette gives a visually rich introduction to prehistoric life. It only takes eight minutes, but the film is a perfect introduction to the way dinosaurs were introduced into the Richmond psyche! Kronosaurus Korner founder Rob Ievers and his brother Ian relive their story of the discovery of the Richmond Pliosaur.

If you’ve had an interest in fossils for some time, you’ll know that this fossil was returned to Richmond recently after a tour of duty at the Queensland Museum. What you may not know is that the pliosaur is currently being scientifically described by a researcher from overseas and is in fact not a pliosaur but a polycotylid plesiosaur. Whatever its name, it is housed in a very impressive display case at the Rob Ievers Gallery. The creature has four hydrofoil-shaped paddles and would have been able to manoeuvre itself very adroitly in the water. The fossil is virtually complete, which is very rare. Another star attraction at the centre is the armoured dinosaur, Minmi, which is believed to be a similar age.

If you take a guided tour, you can gain entry into the laboratory where the latest project is almost complete – a little fossil nicknamed Minnee. The skeleton is laid out on a 1.7-metre slab of rock in the lab.

Many children have a special affinity for dinosaurs, and the Kronosaurus Korner helps give answers to their enquiring minds with the Krono Kids Club. As well, the Krono Kids Club operates online at www.kronosauruskorner.com.au, so the children’s interest can continue even after the family is home from holidays.

Fossick Your Own Prehistoric Souvenir

Get your hands dirty and look for your own prehistoric souvenirs at one of the area’s two designated fossicking areas just 12km from town. While you probably can’t expect to find a complete skeletal structure, the chances are good that you’ll uncover the fossil of a small fish or marine reptile, a tooth, or squid. A specimen guide can be collected at Kronosaurus Korner and anything you find you can take back to Kronosaurus Korner and the team will try to help you identify your find. If you don’t want to fossick on your own, time your visit to coincide with a one-day fossil hunting adventure. Learn to identify fossils from Kronosaurus Korner curator Dr Tim Holland.

After the fossil finding part of the day, return to Kronosaurus Korner to see laboratory techniques both mechanical and chemical for extracting fossils from their limestone coverings. You might even get the bug and want to come back for one of the official digs.

Contact Kronosaurs Korner or visit www.kronosauruskorner.com.au for the dig dates. Prebookings are essential.

Richmond is not just about marine fossils. The town’s pastoral and indigenous heritage can be discovered through a number of free attractions including the Interpretive Historical Walk through the main street, the Bush Tucker Garden and the Cambridge Downs Heritage Display Centre. Constructed from flagstone rock, the building is a replica of the original Cambridge Downs homestead built in the 1860s. The display centre contains historical interpretive panels on the Woolgar Massacre and Woolgar Goldfields as well as Cambridge Downs. It also provides a location for other local records and artefacts. (The actual Cambridge homestead ruins can be seen about 40km from town on the Croydon Road.) Outside, a garden has been created with tea roses, lawn chamomile, lavender, white jasmine, climbing roses, mandarin tree, rosemary, nasturtiums, evening primroses and about half a dozen types of herbs. 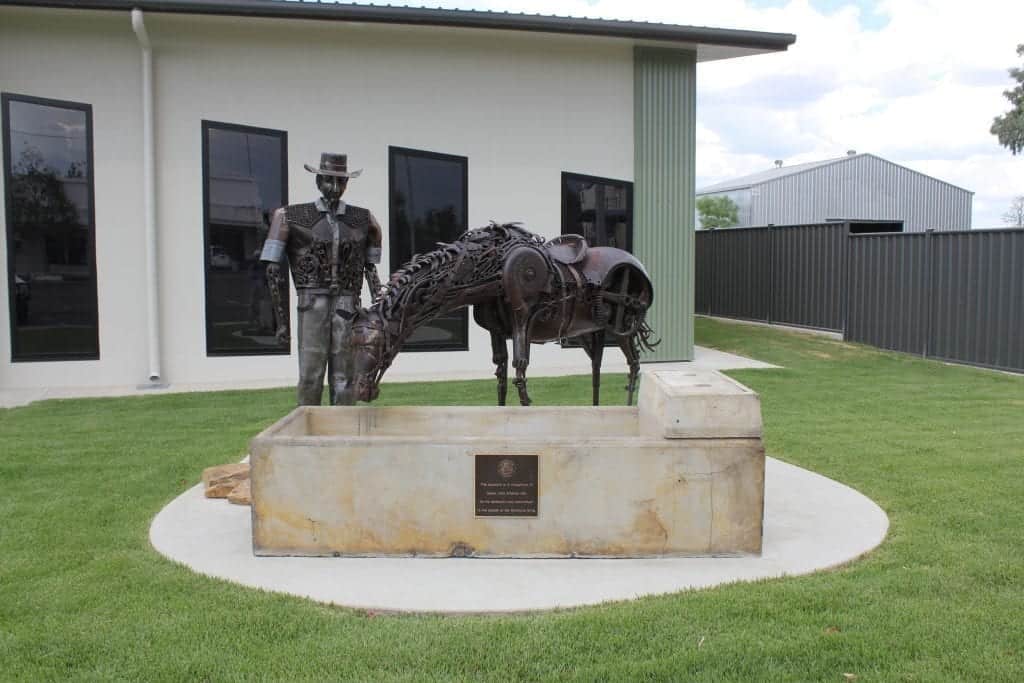 For more history, wander through the Pioneer Cemetery with graves dating from 1886 to the early 1920s.

A unique feature of the Richmond Shire is the prevalence of moonrocks – spherical rocks which sometimes have the fossilised remains of fish, shells and trees in their cores. They come in a variety of sizes, from golf-ball size to boulders weighing several tonnes! And while they’re getting difficult to find ‘in the rough’ these days, you’ll still see them blended into the landscape of Richmond. See some at the Lions Park, along with a restored Cobb and Co coach and local memorabilia. The rocks have even had an event named after them – the World Championship Moonrock Throwing Competition, held as part of the Richmond Fossil Festival.

Special events to look out for in this part of the world are the Biennial Richmond Fossil Festival, Turf Club Races (one in August and two in October), Richmond Field Days and Races in June, the Motorbike Enduro in late June, Richmond Rodeo (usually in July), Outback Moon Festival in September and the Annual Fishing Classic on the first weekend in October.

The new owners of the Mud Hut Hotel have wasted no time in giving the hotel a new look. Freshly painted, with brand new queen ensembles and new linen to boot, the Mud Hut Hotel offers comfortable accommodation for travellers wising to spend some time in the area. There are 24 king single dongas with en suite, and 12 en suite queen or queen and single dongas. You are also welcome to use the free Wi-Fi.

The Mud Hut Hotel is so named as the original building was built by the Chinese in the late 1800s using mud and grass. After a fire burnt the hotel down, the building was rebuilt from bricks. The hotel is on the only place in town with TAB, Keno and poker machines.

Good country pub meals, including steaks, pork chops, sausages and schnitzels, are served in the air conditioned restaurant, with Asian meals on the menu every second Friday night. Breakfast and lunch are also served in the bistro restaurant, with lunch offerings of wraps, burgers and toasties sure to satisfy your hunger.

The hotel also has a 25 metre pool, so you can cool off and relax after a day of travelling and sight seeing.

If you love your fishing, here’s some great news: While most places have a closed season on barramundi, Richmond’s lovely lake celebrates open season all year round.

Lake Fred Tritton has a bag limit of five and there are both minimum and maximum sizes that apply to keeping your fish. The lake is fully stocked with 18 species of fish, including sooty grunter, sleepy cod, archer fish, forktail catfish, gulf grunter and red claw yabbies, thanks to the Richmond Fish Stocking Association. 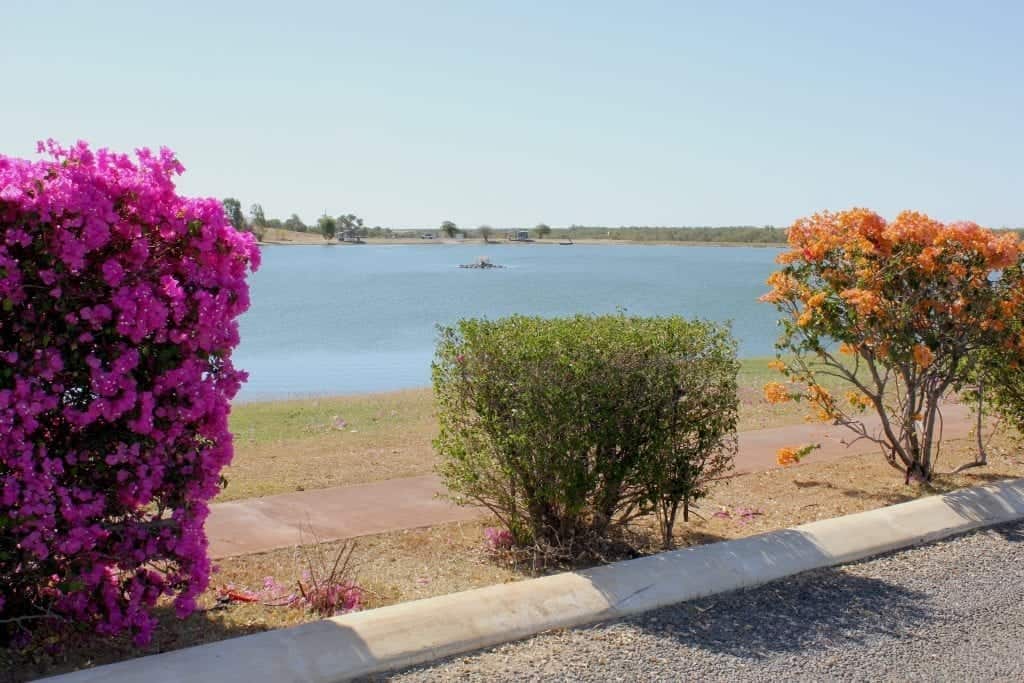 While you’re there, see the Richmond Community Bush Tucker Gardens, showcasing plants used by Aborigines for culinary and medicinal purposes. The plants are all native to the region and have labels to explain their traditional uses. A waterfall is one of the features of the area, and gidgee stones and moonrocks can also be seen there. The gardens are a joint project involving indigenous and non-indigenous people from the local community and the council.