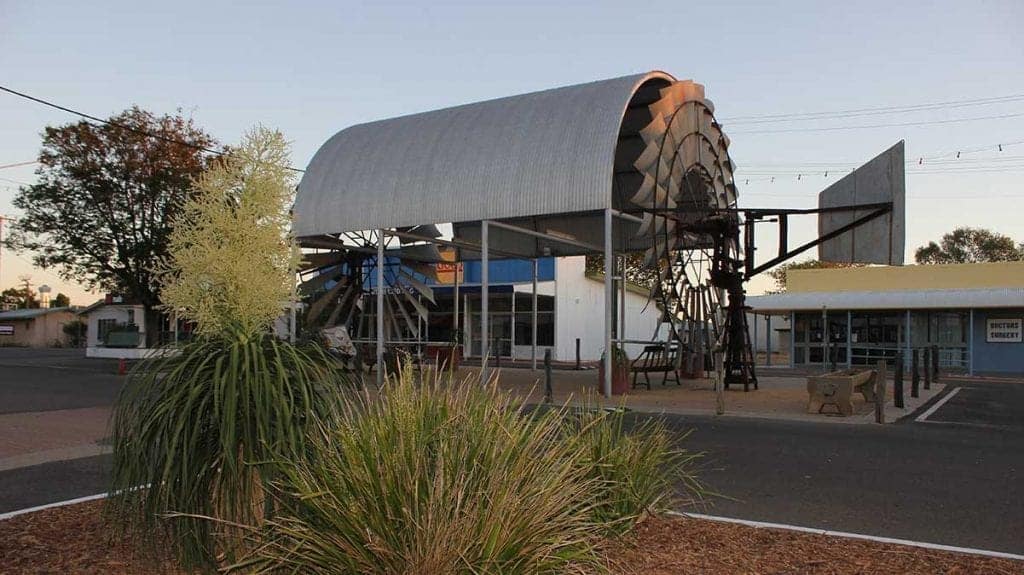 Once, terrestrial dinosaurs thrived here in a lush environment alongside a vast pre-historic inland sea which was the underwater home of great marine reptiles. Today, Hughenden honours – in ways both fun and serious – the memory of those creatures, large and small. You’ll see them in the street, at the local museum and as works of art.

Start at the Flinders Discovery Centre to see the star attraction ‘Hughie’ a 7m life-sized skeletal replica of a Muttaburrasaurus. He has, along with the Queensland Pterosaur, cemented Hughenden’s position on the Australia’s Dinosaur Trail. The Flinders Discovery Centre houses an amazing fossil exhibition from around the world and the Porcupine Gorge Light and Sound Show. Sit in the theatrette be taken back an imagined 500 million years to the beginning of the formation of Porcupine Gorge. Then return to the more recent past with Shearing the Stragglers, the story of the decline of the sheep industry throughout the Flinders Shire. While visiting the centre, also view the video on the town and region.

The Flinders Discovery Centre stocks a large range of souvenirs and information on local and regional holiday destinations. The centre is open seven days from 9.00am to 5.00pm from April to October (reduced hours November to March and closed some public holidays).

Sizewise, Hughenden’s biggest attraction is Porcupine Gorge, which is only an hour’s drive north of town. Porcupine Gorge National Park – Australia’s ‘Little Grand Canyon’ – has a clear, flowing creek, towering cliffs of vibrantly coloured sandstone and dense vegetation. The gorge provides a striking contrast to the surrounding sparsely wooded, dry, flat plains. Hundreds of millions of years’ geological history show in the strata of sedimentary rocks and basalt that have been carved away over millennia to form this impressive canyon. 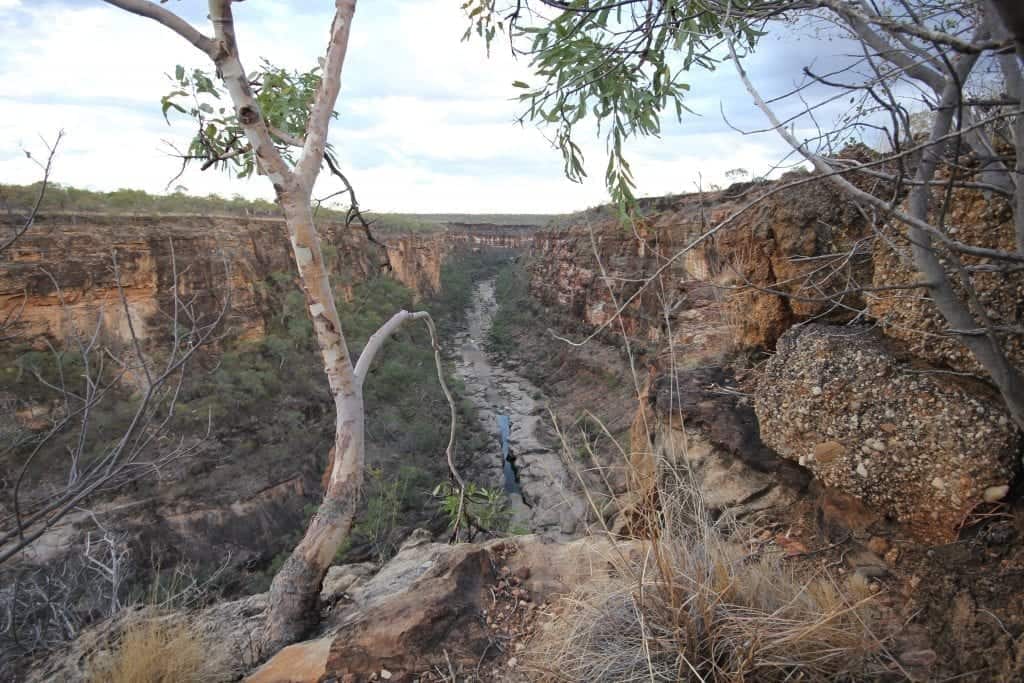 The Gorge can be appreciated from two distinct areas. The first point is a lookout giving a view deep into the gorge below. The second is a national park campsite area. From here, a walking track takes visitors to the base of the gorge where the Pyramid formation is a prominent feature. Intermittent waterholes line the base of the gorge. Have a swim! The Porcupine Gorge National Park offers camping, birdwatching, swimming, opportunities for nature and landscape photography and a diverse range of flora and fauna. 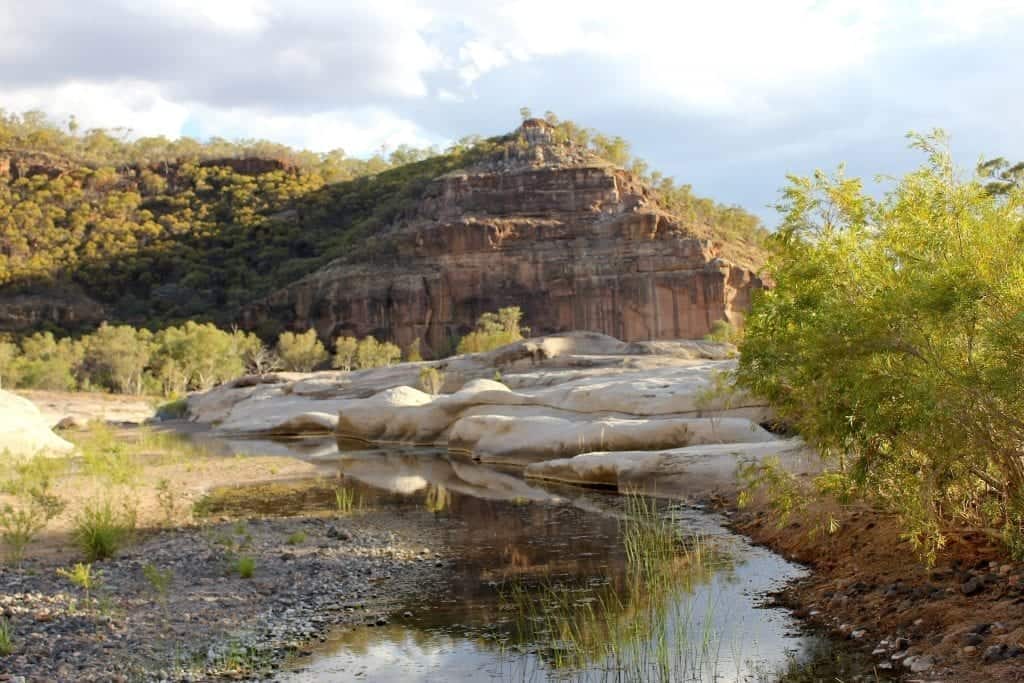 Another natural attraction is White Mountains National Park, named after its white sandstone formations. The park is remote, rugged and has an amazing 14 regional eco-systems within its boundaries.

Camping sites can be booked online www.qld.gov.au/camping or by phone on 13 74 68 (24 hours) or at the Flinders Discovery Centre Hughenden. Campers must be self-sufficient. Campers must ensure campsites are booked upon arrival at Queensland National Parks.

Travel 54km south of Prairie on the Muttaburra Road to see the Kooroorinya Falls Nature Reserve, a relaxing spot to sit back and enjoy nature at its best. If you enjoy nature photography, this is a promising spot for wildlife shots. The Kooroorinya camping site offers modern toilet facilities, hot showers and wood-fired barbecues.

Just 10km south of Hughenden is Mount Walker, which has six lookouts scanning the district’s landscape. Its name is a little piece of history, as William Landsborough named the landmark after fellow explorer Frederick Walker. Mount Walker is approximately 478m above sea level, making it approximately 152m above the township of Hughenden.

Sunrises and sunsets on Mount Walker are beautiful. The road is sealed to the top but there is a 16 per cent incline so the road is not recommended for large vehicles like motorhomes, buses, caravans and campers.

Back in town, don’t miss sitting on handcrafted bush furniture in the shade of the Federation Rotunda, known as the windmill rotunda because it was built to incorporate two 20-foot windmills brought in from south of Prairie. Hughenden is also home of many impressive locally made and designed sculptural pieces adorning buildings and gardens throughout town.

The historic Coolibah Tree was blazed twice by explorers – Frederick Walker and Sir William Landsborough – while they were searching for Burke and Wills. The surveyors’ peg is adorned with four brass plaques representing historical figures and events.

The Flinders River, at 1004km in length, is Queensland’s longest river and flows into the Gulf of Carpentaria. It was named after Matthew Flinders by Lieutenant Stokes of HMS Beagle in 1841. The River Walk incorporates a walking trail along the banks of the Flinders River.

Robert Gray Memorial Park is dedicated to local characters and pioneers of the local district. Facilities include free barbecues, picnic areas and public toilets along the northern banks of the Flinders River.

‘Mutt’ stands proud on Stansfield Street and is a very photographic friendly character who welcomes all guests to Hughenden. He is a favourite with many who pass through the township. 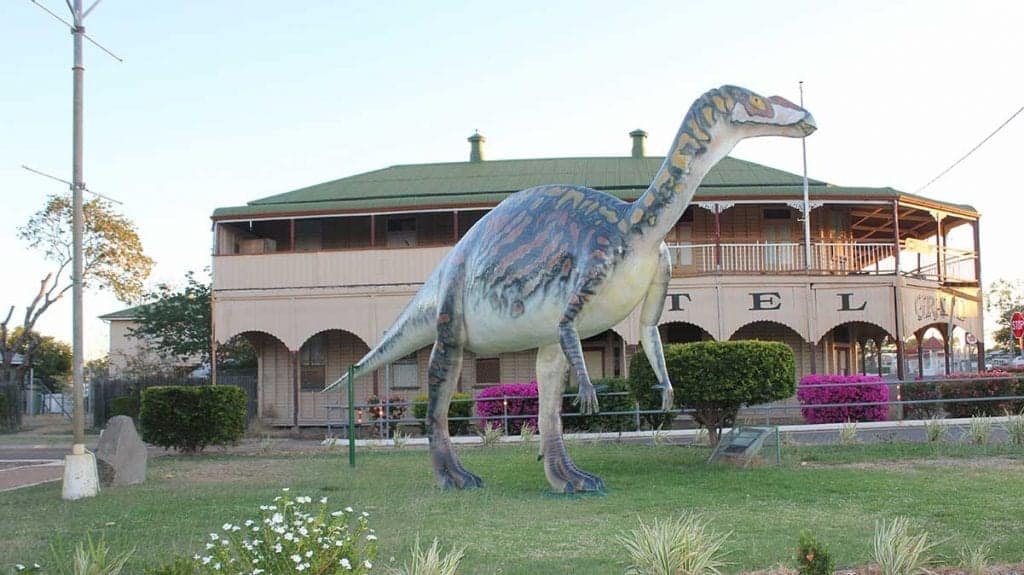 Hughenden Town and Cemetery walking tours are available between May and September. For more information and bookings call (07) 4741 2970.

Also visit the smaller communities of the Flinders Shire. Prairie, Torrens Creek and Stamford all have stories to tell from the ghostly prowler to Cobb and Co history to the time one town was almost blown away.

Prairie is a little settlement with a population around 50. It’s surrounded by rolling plains of Flinders grass and is situated near the railway line that runs from Townsville to Mount Isa.

Torrens Creek is even smaller, with just 20 people living there. It has quite a long history for such a little place. The creek after which the town is named was discovered in 1862 by the explorer Landsborough who named the creek after the then Premier of South Australia, Sir Robert Torrens.

Stamford, just 61km south of Hughenden, is on the Dinosaur Way (the Kennedy Development Road) that links Hughenden with another dinosaur-rich town, Winton. Stamford was originally part of the Katandra Station before becoming a little town in its own right. Nowadays it has a roadhouse and an annual race day is its main claim to fame.

For more information on Hughenden and region call (07) 4741 2970, go to the website at www.visithughenden.com.au or see their Facebook page.