Experience true-blue outback hospitality in Blackall, a town with plenty for visitors to enjoy and experience. With iconic buildings, treasures dating back a century or more, unique sculptures and murals scattered around the town, soothing hot water spa, friendly townspeople there is certain to be something for everyone.

The historic Blackall Woolscour with its 20-stand shed attached, offers a step back in time allowing you to experience the magic of working steam machines and enormous wool driers. More than a century old and an engineering feat of its time, the Blackall Woolscour is a showcase of the achievements and determination of Australia’s pioneers. The building itself is one of the largest timber framed buildings of its type in Queensland and the entire hoop pine
frame is tenon and morticed making it completely nail free!

Take a tour and discover the magic of steam at work in the last fully intact steam-powered wool washing plant in the country.

The Blackall Woolscour is open all year round and can often be seen operating on steam power during the months from May to August. The Woolscour is open from 9.00am to 5.00pm, seven days a week and guided tours are conducted hourly every day, with the first tour leaving at 9.00am and the last at 4.00pm. Afterwards, take a self-guided walk around the grounds, including the old shearers’ quarters and cookhouse, browse through the souvenir shop, grab some smoko or lunch from the cafeteria and relax and enjoy the quiet outback scenery.

The Great Artesian Basin was formed between 100 and 250 million years ago and old mixes with new when artesian water sees the light of day at the Blackall Aquatic Centre. Take a dip in pure artesian waters at the Aquatic Centre with a relaxing bubble spa or swim in the 50m swimming pool. Both are heated during the winter months allowing visitors and locals to enjoy its benefits all year round. The pool has a kiosk, disabled lift and walk in access and is open seven days.

The Universal Garden Centre houses an historic display relating to Jack Howe and local history. On October 10 1892, Jack Howe achieved the incredible feat of shearing 321 sheep in seven hours and 40 minutes with blade shears; a record which has never been broken. In the same year he set a record of 237 sheep shorn with the new mechanical shears; a record which stood for more than 50 years. A sculpture of Jack Howe stands guard outside. 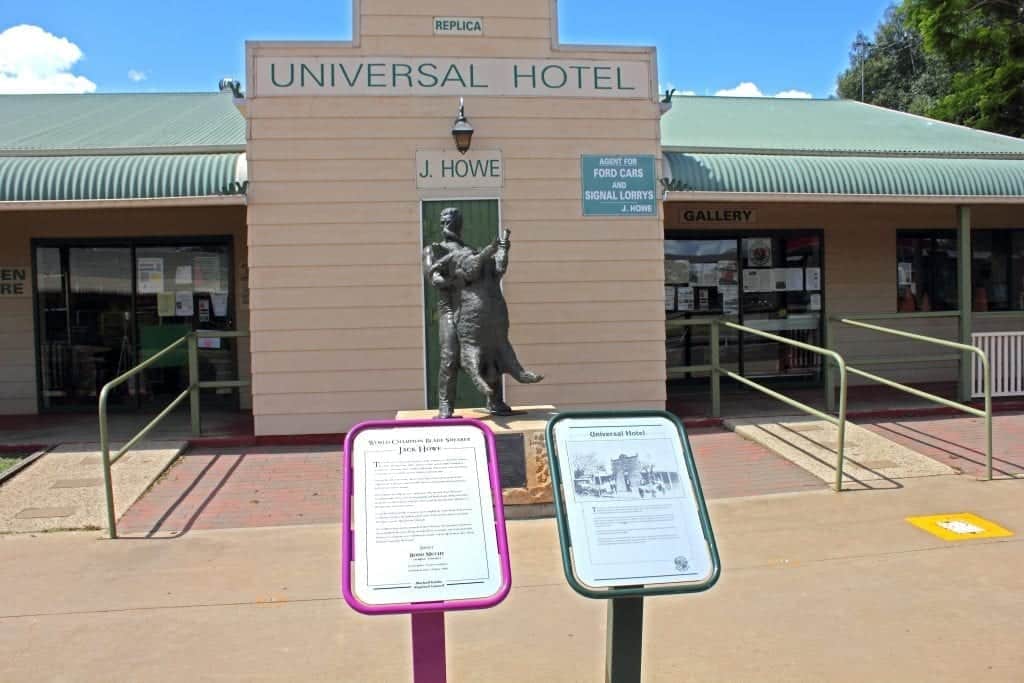 ‘beyond the black stump’ History

You can say you’ve been ‘beyond the black stump’ once you’ve been to Blackall.
A petrifi ed tree stump represents the observation site surveyors used to establish
a principal meridional circuit traverse around the town in 1888. They used the stump as a solid base for their transit while surveying and that’s where the old saying, ‘beyond the black stump’ originated. The original transit and the few known photographs of the original stump can be seen in Navena Homestead at Ram Park. A sculpture of the ‘Black Stump’ by Phillip Perides and murals by local Bob Wilson and cartoonist Sean Leahy make this a site not to miss. 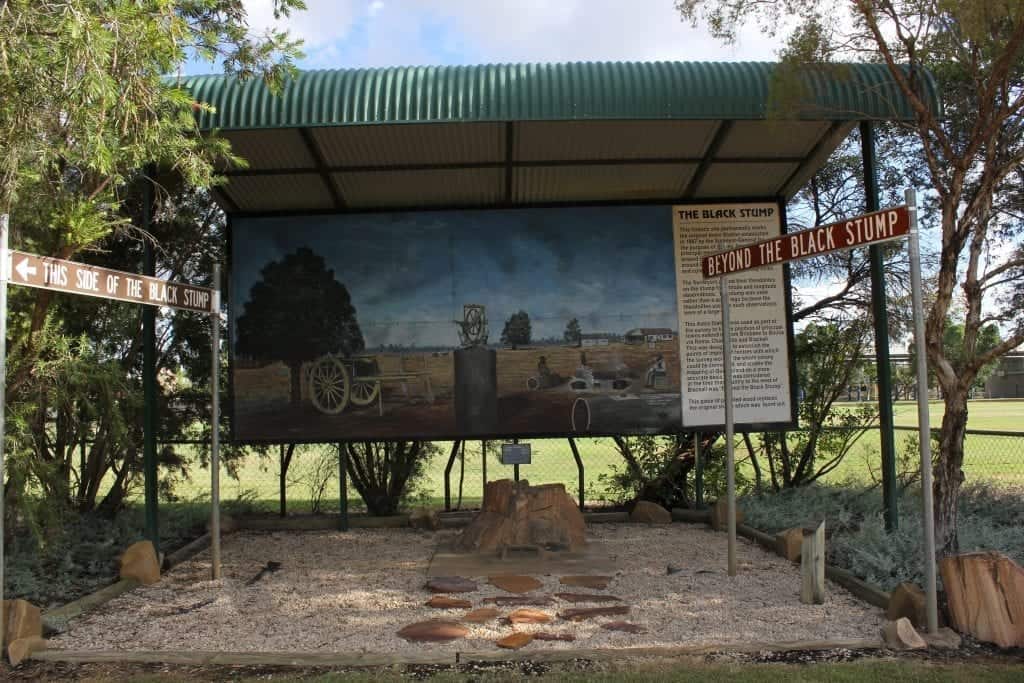 Ram Park, symbolised by a big ram at the corner of the park, also houses the visitor information centre. Exhibiting cultural and heritage themes, the Shamrock Street complex is the setting for historic buildings which exhibit Blackall’s history as well as the community of Yalleroi. Navena Homestead reflects a typical home of early pioneers on the land while the Yalleroi School is typical of a one-teacher school. The historic railway station building is a reminder that the rail was a lifeline to the west from 1908 until its closure in 2005. 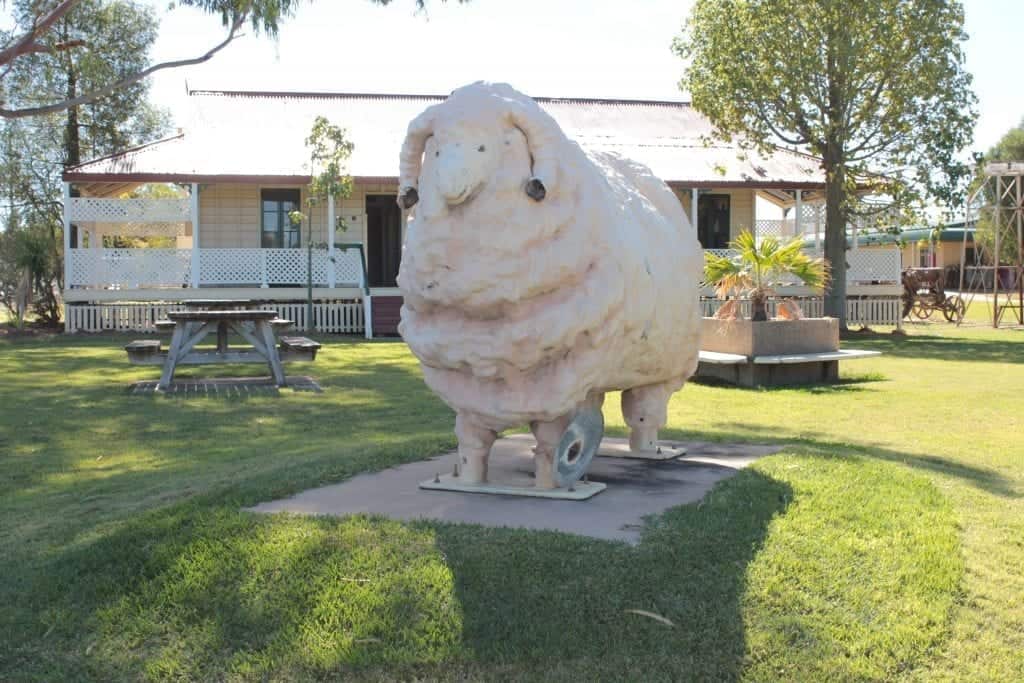 Blackall also played an important part in the history of today’s Australian Labor Party and the Australian Labor Federation Memorial in Short Street commemorates the formation of the first shearers’ union back in December 1886.

One hundred years after Major Mitchell explored this area, a dedication to this intrepid explorer was unveiled in Shamrock Street. The Thomas Mitchell Memorial Town Clock pays tribute to Major Mitchell, Graham Douglas and Youranigh their aboriginal translator.

The township of Blackall dates back to 1864, but for pure antiquity the tree stump located in Shamrock Street beats it hands down. Found on a property near Blackall, the petrified tree stump is said to be aged anywhere between one million to 225 million years.

The Masonic Lodge which was built around 1908 has survived in nearly original condition, and its heritage has being recognised by inclusion on the Queensland Heritage Register. Many of the buildings in Blackall retain evidence of various periods of development over the 19th and early 20th century.

Blackall was the first site in Queensland to be selected for an artesian bore and the Pioneer Bore commemorates where drilling first commenced. A mural by local artist Bob Wilson depicts drilling operations in the early 1900s, while nearby a steam engine and drilling plant show the type of machinery typically used to construct water bores. 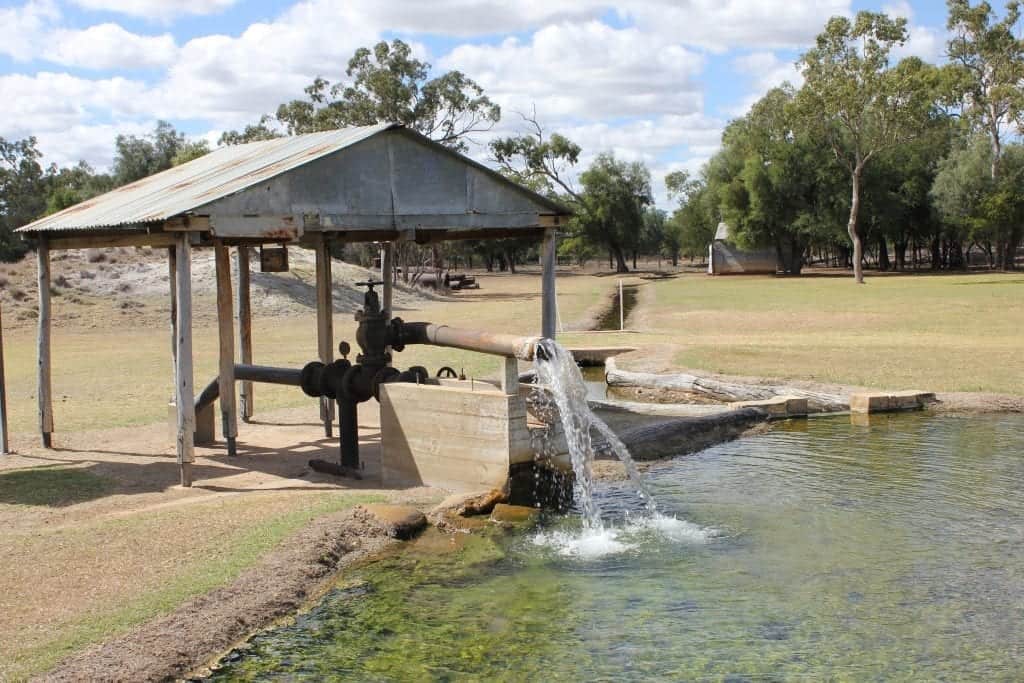 The residents of Blackall have natural hot water on tap, as artesian water is fed directly into their homes. More information can be found at the town bore in Leek Street. The bore is about 800m deep and the water temperature ranges from 58 to 62 degrees.

Local resident, Arthur Behan built his fi rst sulky at the age of fourteen. Take a stroll past the Behan’s garden in Clematis Street to enjoy their sulky display. But they’re not just to look at. Late every afternoon during the tourist season, Arthur and his wife Hazel take a run around town and down to the river in one of their sulkies – providing a delightful glimpse of days gone by.

Artistic treasures also abound. Marvel at the ingenuity of unique pieces of sculpture, The Eagle and Nest, the Circle of Friends, the Roly Poly and a three-metre-high Bottle Tree – all made entirely from recycled metal. Also see Lifespan, mostly made from bore casings and a timber representation created for the Woolscour Centenary some years ago. A statue of Jack Howe stands outside the Universal Garden Centre and Gallery while a bronze of Lieutenant Edgar Towner, who was awarded the Victoria Cross for ‘most conspicuous bravery, initiative and devotion to duty’, is situated in the Blackall Memorial Park.

Local artist Bob Wilson has a number of murals around town, while Sauce from Sauce Studios has made brick walls come to life with outback scenes. Brightening up the town are locally taken photographs taking pride of place on many shop windows, ensuring a stroll down the main street is well worthwhile. Local art school teacher Lucy Senior has a number of paintings, depicting Blackall in days gone by, on display at Albert Park.

For those who like to experience the true outback, a visit to Idalia National Park about 112km from Blackall, has plenty to offer, with majestic red river gums, spring-fed waterholes, rocky escarpments and a wide variety of local flora and fauna.